The following article written by SasaHara was republished from museumofedible.earth:

Geophagy is the act of eating earth and soil-like substances, and four years ago I would have probably  laughed at this statement, however, I now eat earth almost every day. Kaolin, or white clay, especially  one that I order from France, my country of origin. The more time that passes, the more I find ways to  bring the clay into my eating habits. Be it for the taste, its curing properties, its texture, or simply for  the decoration: the ways to use clay into the world of cooking are extremely numerous. I want to share  here some of my ways with you, as well as give you a little bit of context to how geophagy has entered  my life.

In 2017 I moved from Paris to Amsterdam to start working for masharu. I had found their work through the internet and got captivated by how they are able to address art, science, and spirituality at  the same time. I was also very excited to discover a new city, a new country, and to leave my home nest. The excitement made me very permeable, eager to discover and stretch to any new horizons that  would come upon me. Back then was also the start of a life-long health problem. As no good things  can come without its counterpart, I was discovering the hard way a set of intolerances in my stomach  and digestive system. If these were not treated carefully, it would result in drastic pains, seemingly acidic  problems. It led me twice to the hospital where the doctors had sedate me. Even until now,  no doctor has been able to make a proper diagnosis and I have been developing my own treatment,  while listening to my body and feeling what is right and what is not. In the beginning of 2017, I  discovered these problems, at the same time I discovered geophagy. By the time I started to work at  the masharu studio, they proposed me to taste some of their earths, which I gladly accepted. I soon  had an intuition that clay would be the aid to soothing my pains. This intuition would partly come from  facts I knew, such as existing soil-like medicines used for those pains or also the absorbing property of  clay, but my body was also asking for it, making me want to eat it. The body often knows what it needs,  and for those who are ready to listen to it, many good outcomes are to be expected. My pains were so  strong that I trusted this intuition to be true, and it was. The first striking example was coffee.  Previously, I could not drink coffee, or I would instantly feel a burning pain in my stomach. Mixing clay  in the coffee would take away its acidity and would allow me to drink it safely.

Since then I have been trying many new earth samples through working with masharu. I have been  developing ways to use the clay reiterating them in my food habits. I am now only drinking coffee with clay, most likely kaolin. White clays have a large amount of calcium, it grants them a very soft structure,  and when mixed with a liquid they become very creamy. Using white clay with coffee feels to me like  drinking a coffee with mineral milk. The beverage has a similar soft and creamy structure like would  any other milked coffee (cow milk, almond milk, soja milk etc.). But it also has a subtle mineral after taste. White clays’ taste is very light, the strength of the coffee mostly overruns it, but to whom pays  attention, will arrive this mineral presence within the creamy structure that makes it so special. And  of course, in addition to the taste comes a real health benefit. Coffee is indeed very  harsh for the stomach; its acidic composition often causes people to have stomach burns or acid reflux.  Even if the pain is not felt, it remains hard to handle for the digestive system, the clay has the power  to make the coffee more digest and less harmful.

From this first experience of clay, I have been using it in other ways. For instance, I use it instead of  cream and when cooking something that has a cream-based sauce, I am now using clay instead. The  difference is subtle and yet strong. Cream gives a taste of fat, and with it comes a heavy consistency.  Clay also brings everything together and gives it a more consistent structure, makes it creamier, but it  will not add this taste of fat that normal cream has. It brings the structure in the mouth, in a stickier way, but does not bring the fat and the difference is striking. I really enjoy it because it allows those  foody experiences and yet spares the heaviness. Using the clay as a sauce requires the preparation to  already possess some liquid, if the meal is somewhat dry or at least lacks some juice, it requires to add  something first before the clay. One of my favourites is the coconut milk. It has a quite watery  structure, mixing it with clay will create a delicious cream that plays with a coconut main taste and a  mineral after-taste. Furthermore, powdered clay can also be used as a fancy last touch if you sprinkle  it onto your meal when ready. It adds this beautiful snow-like coverage, and eventually also helps to  make the meal more digestive as clay is always a good facilitator for the digestion. When mentioning  the clay above, I only talk about refined clay powder, cleaned and ecologically produced.

An example of recipe: the vegetable clay-wok (vegan)

• Boil rice noodles of your choice, keep them ready in a bowl (add a pinch of oil of your choice  to avoid them gluing to each other, I advise sesame oil)

• Slice zucchini (or other veggie of your liking) and grill them in a pan with coconut oil, add spices  such as nutmeg and cumin, grill with strong fire for a few minutes. Move them often to avoid  any burns.

• When the zucchinis are grilled, lower the fire, add the prepared noodles into the pan, mix.

• After a minute or two, add a bit of coconut milk with it. A nice addition at this state can be  dried cranberries/dried prunes. Put a strong flame and keep one last minute in the pan, keep  everything in movement.

• When the minute is passed, take out of the pan, mix clay with it to unite everything together  and bring the creamy texture.

• Serve, with a bit of fresh coriander on top.

Disclaimer: I tried adding the clay during the cooking, but I personally did not appreciate the result, it  creates a weird reaction that makes small hard pieces, as if the clay was solidifying .

Using the clay for cooking purposes is a world of experimentation and new possibilities. Those are not new at all, they are in fact very old. On the scale of human history, soil was part of all food cultures at  some point, often relating to spirituality as well. Many cultures, especially the globalized west, have  forgotten about geophagy. Eating earth has been connected to poorness, when brutal slavery and  colonial structures have denied access to food to the slaves who had nothing to eat but the soil under their feet. It eventually became in English “dirt”, relating dirtiness to earth. However, health instances  have conducted research and uncovered negative impacts of eating earth on the human body.

Bringing back clay and soil-like substances into our eating habits also brings a questioning onto what  is considered edible or not, and who decides of it. Are food systems purely social constructs? To what  extent is what we eat a result of our cultural background and environment? Using earth into my  cooking has been a claim onto my body. I am what I eat, and I decide who I am. At a certain point in time geophagy has crossed my way, and I included it into my habits. For many it sounds like a weird trendy practice, for me it simply feels good. 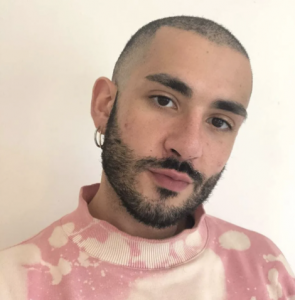 SasaHara is a creative born in Paris in 1993 and based in Amsterdam since 2017. They work as a transformer and a writer, playing with drag aesthetics in different formats (editorial, club, theater) to create queerophantasmic narratives. Alongside their personal creation, SasaHara works as a creative producer (production, curation, PR, communication) for various artists and collectives. As a manager, they are interested in promoting communality through art and upholding non-normative standards, in the cross-cutting forms of the contemporary creation.

masharu is an earth eater and earth lover, with a PhD in Mathematics. For the last 10 years they have been working as an independent artist and researcher, focusing on the topic of eating earth and earth-like substances.
Learn more about the Symposium