60% of all WUR students live in the municipality of Wageningen, which includes Wageningen-Hoog and Nude. These 8.650 students represent around 22% of Wageningen’s total number of inhabitants.

That is quite a big chunk of the total number of inhabitants, so you would expect students to make a difference in council elections, if they turn up to vote that is.

This March, elections for the municipality council took place, with a historically low voter turnout.

Only 50,3% of the   people eligible to vote turned up on voting day. Wageningen did a bit better job though; 57,8% of eligible voters went to vote in our municipality.

In Wageningen Groenlinks received the most votes, with 27%, the Stadspartij became second with 16% and PvdA and D66 became third and fourth with 14% and 13% respectively. Connect Wageningen ended in fifth place with 10% of the votes, thereby keeping their 2 current seats in the council.

We dove deeper into the voting results to look for differences between student and citizen voting:

Out of the 26 voting locations within Wageningen, there is only one that might be representative of the student population, and that’s the polling station in the Forum building. 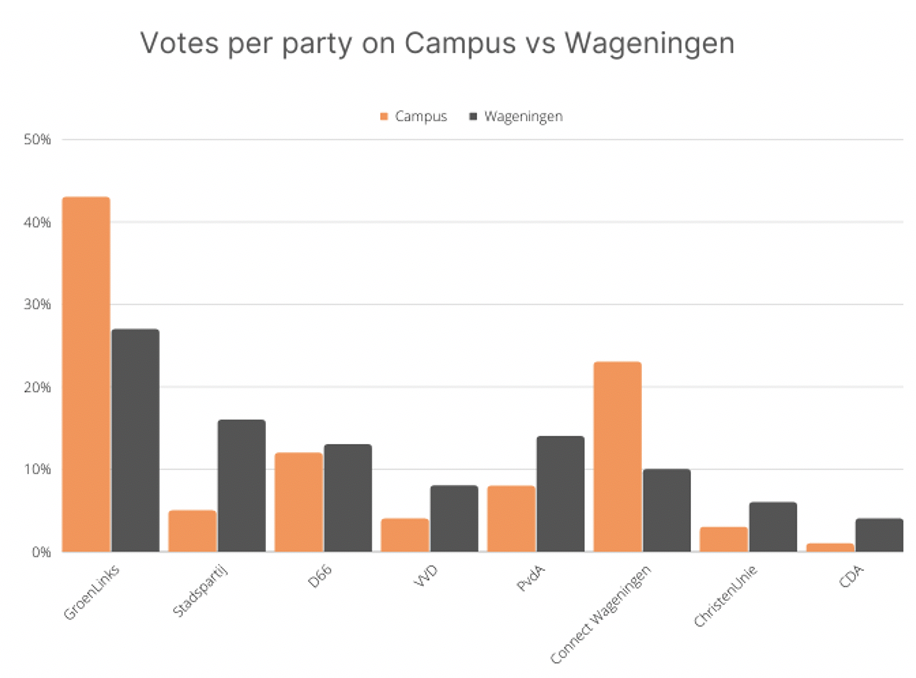 If only the results of the Forum polling station were to be taken into account, GroenLinks (GreenLeft) would still  be the biggest party, but with a much larger number of seats. Student party Connect would be the second largest and D66 (democrats) would be third. The Stadspartij (City party) is one of the least popular parties among students, while being the second most popular one among all Wageningen voters.

Might there be a correlation with the amount of times “students” are being named in the party programs?

In the summary of the Stadspartij program, one has a very difficult time finding the word “student”; it is completely absent. The Groenlinks website doesn’t show a program, but separate standpoints, with “students” mentioned 4 times – already better than Stadspartij.

Interestingly, Connect Wageningen does not have the word “student” all over their website and social media posts, but they do a very good job making the party accessible for a wide range of internationals, students, newcomers and youth in Wageningen. Students are named a few times, but in between the lines you can see that they are always taken into consideration.

Groenlinks is the largest party in Wageningen, as well as in most student cities such as Eindhoven, Groningen, Leiden, Nijmegen, Tilburg and Utrecht.

The voting result of Wageningen fits in that image. Perhaps that means we can conclude that if it would be up to the students, Groenlinks would be the biggest party of the Netherlands, not VVD or CDA.