As a kid, I used to spend my time entirely outdoors. From climbing trees, to playing in the rain, to rolling in the mud – being outside and covered in dirt was my comfort. Now, like most outdoorsy youngsters, I was often told to wash my hands before I ate and to keep dirt out of the house; earth belonged outside and most definitely not on our plates. Now it’s a potential superfood? What’s up with that?

Fast forward a few decades, I’m attending the Earth as Superfood Symposium, organised at Impulse, led by the World Soil Museum (ISRIC) and masharu, founder of the Museum of Edible Earth. As an avid health nut, my interest was piqued when hearing about the idea of introducing earth-like substances into our day-to-day diet.

I was eager to learn more, having been advised for years to keep soil out of my mouth and plate.

At the symposium, I heard about how the intentional practice of eating earth or soil-like substances, geophagy, dates back centuries throughout different parts of the world, from Thailand, to Japan, to sub-Saharan Africa, where prevalence of geophagy is estimated between 10-75%.

I learned about different ways to ingest earth, through coffee infusions, mixing it with dough to create a clayed-up stroopwafel, or just taking a bite of it when feeling peckish.

Some people described that they only had a sprinkle in the morning, which had helped with their digestive system like never before, while others “snacked” on small bites throughout the day because they simply enjoyed the taste and texture.

We even heard about Monstvilene Stanislava (see below), an elderly Lithuanian woman, who swears she has lived on a sand-only diet for over a decade, curing her late-stage brain tumor and drastically improving her health. Talk about a killer sand-wich. 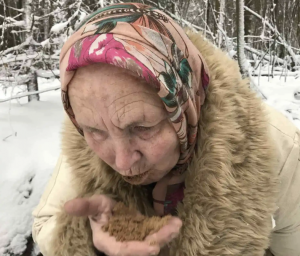 However, geophagy is regarded as a psychiatric disease, a culturally sanctioned practice, or a result of famine and poverty.

The American Psychiatric Association defined this eating habit as a “non-nutritive substance that is inappropriate to developmental level” regarded as a “mental disorder” if it occurred outside of a cultural practice.

So, unless you were born in a culture where people typically ate earth, you must be mentally ill for having a bite of clay a day.

It is important to note that bits of clay and earth minerals are present throughout common medicine we intake, especially those for indigestion and irritable bowels.

Eating earth is part of our day-to-day without us even noticing it.

At the symposium, we heard from Ron Hoogenboom who works at the RIKILT institute, and collaborates with Dutch Food Authority, on the potential health concerns regarding dioxins or pollutants in un-tested clays.

We quickly understood, though, that dioxins are found all over the globe, with more than 90% of human exposure due to animal tissue, specifically meat, dairy products and fish.

How does eating earth fit in the context of superfoods?

I interviewed masharu, founder of the Museum of Edible Earth, to learn more. For the last 10 years, they have been working as an independent artist and researcher, focusing on the topic of eating earth and earth-like substances.

Their travelling museum, based in Amsterdam, has a collection of 400 – 500 samples of edible earth from all over the world (you can even try Stanislava’s sand, if you’re interested in an extra morning crunch).

When we talk about earth, specifically ingesting earth, masharu clarifies that it means all things such as clay, chalk, limestone, and even topsoil. This term, however, goes beyond its scientific definition, as it refers as well to our planet Earth:

“For me it is more than eating; it goes to say that when I eat earth, there is a partnership and a cherishing of the earth [that occurs].”

But superfoods mean quite the opposite to cherishing the earth…

According to Oxford Languages, the term superfood quickly rose to the masses in the early 2000s before becoming a catchphrase for any food considered to be beneficial for our health and well-being (think avocados, chia seeds, nuts, leafy greens), and, of course, that looks good as an Insta post.

Superfoods seem to make us think that a handful of nuts, a kale salad, and a mouthful of organic avocado toast in the morning will have the magical capabilities to give us that summer bod we’ve dreamed of, heal diseases, and create world peace.

But I quickly understood that masharu approaches the earth element as a sacred food, shifting the lens on the eating process.

Seeing earth as a life-giving source, both in the spiritual and physical form, could be a solution for both our diets and our societies.

“To me, eating earth is about giving dignity to earth.”

By getting in touch with earth, which could be by tasting or other means, masharu explains that we can be more conscious of what we eat based on what our body needs rather than what the mind wants (aka. that chocolate bar you’ve been eyeing up for the past 30 minutes), engaging in more respect not only towards the earth, but also to ourselves.

According to masharu, we often have a different connection to food rather than people who work the land all year round to have a meal on their dinner table, and who feel grateful for the “magic” earth has to give.

The real magic of seeing something grow from seed to product, and how much you depend on the success of its growth.

Eating earth is more than just about the nutritional value – which offers no more than a few minerals and vitamins.

More than a superfood, earth is a super element. Earth as a superfood could help bring nourishment to the body, soul, and spirit, as well as encourage people to increase their awareness and care for the earth.

So, next time you go on a walk in a park, take a stroll through some grass (avoiding the renegade dog turds), and scratch the bottom of your shoe and have a taste – it might change your life!

After dishing up all this dirt on superfoods, the Jester found it necessary to introduce a new definition.

Have a "soil dinner" organized in collaboration with the Slow Food, Museum of Edible earth, and World Soil Museum. Dinner will be prepared by chef Christian Weij, on October 12th from 18:00 - 22:00 in SmaakPark!
Get your ticket