It’s Tuesday evening in the corner of the Forum basement, and a group of volunteer students slips on their orange jumpsuits, ready to take on the line of bikes that is slowly growing before them. Lights on, tools out, music turned up, and off they go! Broken disks, punctured tires, snapped chains or rubbing breaks, there’s little this team cannot handle, especially when they put their minds together. I spoke to Aart, Lilly and Lima, three volunteers at WUR Bike Repair, to find out what gets them going.

What’s WUR Bike Repair all about?

WUR Bike Repair was started in 2013 by a few students and their tools. As you know, having a bike in Wageningen is
pretty central to getting around. With so many in town, there’s always a bike in need of tender loving care. That’s where WUR Bike Repair comes in – a Tuesday evening hangout where you can go and get help with your beloved bike, and maybe learn something from the lovely volunteers along the way. For Lilly, “the student bike repair is all about helping other students and members of the community while learning new skills. Because you don’t need to know a lot to start becoming a volunteer, it’s a great way to learn how to fix bikes while helping others, which is an extremely rewarding and fulfilling way to pass time”. WUR Bike Repair volunteers “like getting busy and dirty with bikes”, especially when they
get to help others or “teach them how to be a little more self-sufficient, Dutch-style”.

Why do you do what you do? Do you like repairing bikes? 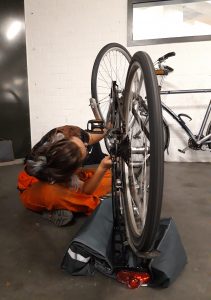 Whether compared to Lego or to a puzzle, WUR Bike Repair volunteers see bike repairing as a game, from which you can always learn and for which there’s always a solution. In Lima’s words, “it’s like Lego but metal and it will thank you by taking you home once you’re done”. Lilly finds “fixing bikes really relaxing, like some sort of meditating state, which is often punctuated with insults towards rust and other hitting things with big tools until they do what you need them to do. So yes I’d describe myself as a bike nerd or bike gremlin”. Aart also likes putting his knowledge and feeling for repairing bikes to good use by helping others. He says there’s a “really nice dynamic going on in the repair sessions and it is also a nice contrast to being busy with studying”. Having been there a few times to get help with my own bike, I can confirm – it is a nice place to be on a Tuesday evening!

Around how many bikes do you repair every week?

Aart, Lilly and Lima estimated repairing roughly five bikes each on Tuesday evenings. Lima explained that at times, volunteers are running around working five bikes, and other times, “we’re hanging out, catching up and dive like a team of surgeons on one bike for the whole night”. I have a feeling they were being humble though. The night I was there, I counted 24 students lined up with their indisposed bikes, with more people coming in as I was leaving.

What’s the most broken bike you’ve ever repaired?

“Ha, too many to count! We pride ourselves on saving bikes, so they usually come in as older, used, maybe slightly abused bikes. We had one that had a broken chain, bent wheels, flat tyres, no lights. We got that one riding again, so almost no bike is truly lost as long as we’re around!” said Lima. Very sweetly, Aart also noted that “sometimes people come with bikes of which almost everything is broken and the mechanic in me wants to fix all issues but the owner just wants the worst problem to be resolved in order to cycle again. That also is something I appreciate, people are so forgiving, understanding and considerate in these things”.

Can you think of any funny stories linked to broken bike you’ve had to repair? 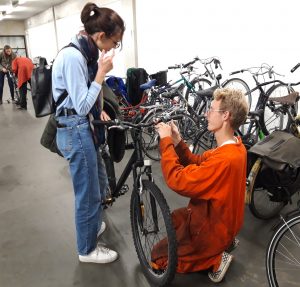 Last year, Lilly got to fix a recumbent for a kid at her workshop, ensuring in “30 mins of skidding in the parking lot with my co-workers to test its abilities. That was a fun day”. Something funny that happens very rarely, but always amuses Lima, is when “someone comes in saying that their steering wheel is tight, and their brake acts weird when they turn. It has happened twice, and what happened there is that they just turned their steering wheel 360 degrees and have tangled the cables around the steering. It’s the simplest fix and always ends in a chuckle”. And of course, there are those post-night out bicycle stories, with people bumping into things in a way that always surprises Aart: “Bit by bit they start, with some shame, to tell that they were super drunk so they were unaware of their accident happening”. “Sometimes people offer food or drinks. That is always a pleasant surprise”, says Aart. Take note people! You know what to do next time you head to the Bike Repair.

What would you tell people who don’t want to fix their bike because they’ll get oily hands?

“Oily hands are great”, says Lima “Anyone in the group can tell you how great it is to get out of screens and books and puzzle with cables or chains and very rewarding because we will make sure your puzzle fits. On top of that, we have a nice citrus mechanics’ soap that is a little zen victory moment to rub in your hands, enjoy your success and get all the grease out”. Lilly also shared some wise words, that “it’s easier to walk with dirty hands than walk with clean ones in the Netherlands”. Aart added that he’s “not here to judge these things, I met many people with two left hands for repairing and maintaining bikes but they have talents elsewhere that are more valuable. I met so many brilliant students on their way to improve the world so I respect their vision and I like to have helped them a little”. Aart – we thank you!

If you could choose one bike repair tool to take with you everywhere you go, which would it be?

Lilly carries a multi-tool everywhere she goes, so this might be worth noting for all of us (if we can figure out what to do with it that is). But if she had to choose a very cool, nerdy tool, it would “definitely be a derailleur hanger alignment tool – it is massive and only has one use, but it does it well”. Lima’s favourite tool would probably be a number 15. It’s the one that opens the axis of the wheel. “I mean, it’s all teamwork with the tools, but the number fifteen is like the big brother, that does heavy lifting. A heavy, weighty, reliable big brother”. Finally, “out of a purely rational pick, [Aart] would pick an adjustable wrench but the tool that amazes me most is something that looks like a screwdriver though has a 10mm socket on the end. Ideal for adjusting the chain tension on standard Dutch bikes. Nerdy enough?”.

Come rain, come shine, WUR Bike Repair is always there, every Tuesday evenings from 18h00-20h00 in the Forum basement. I guarantee you’ll be met with smiles from Aart, Lilly, Lima and other volunteers who’ll help you with your bike and teach you some tricks of the trade if you’re interested. And if you want to get more involved and join the team of volunteers, you’re welcome! 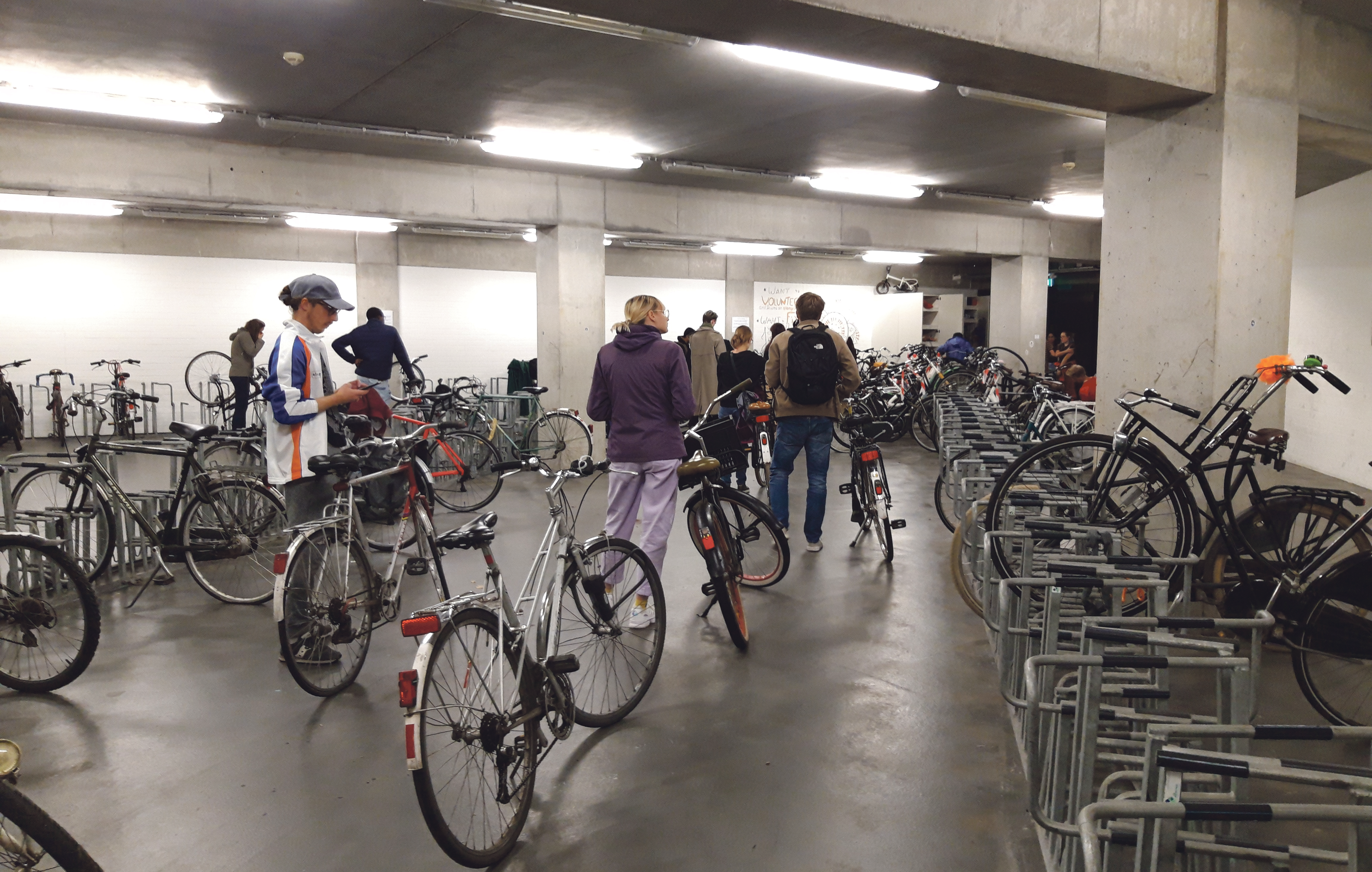 Learn more about the activities and events Wageningen has to offer. Who will take up the reins, and what will this mean for our university?