The Wageningen model : lessons in education

Consider for a second what you value the most about education in Wageningen. Every single one of us may have a different answer but a sizeable portion would agree that it is quite a unique place. WUR has made a name for itself in the agricultural and environmental sciences and yet, if that is not enough, one would have a difficult time sidestepping the insistence of the academic authorities on how well positioned our institution is in national and global rank- ings. They certainly have a point; students and staff alike hold our institution in high esteem, as reflected by both in-house and independent surveys.

Coming from outside of the Netherlands, I found myself amazed during my first weeks in Wageningen by the many changes and fresh ideas entering my daily life. Therefore, and incidentally, with the opportunity to write for a new student magazine, I have a serious chance to think carefully about the factors that make Wageningen such a unique place and be able to share them with you.

Multiculturalism is one of the first features that stand out, made all the more remarkable in such a small town as Wageningen. As a foreign student I acknowledge the in- ternational ambience at Wageningen; it is difficult to stroll around Wageningen and not hear myriad languages. Natu- rally, allowing different cultures to co-exist strengthens the bonds between cultures (and uncovers oftentimes unexpected similarities) while at the same time helping to tear away prejudice and mistrust between them.

The multicultural environment of Wageningen may well be a good indicator of its international reputation. The ben- efit of this is twofold. On the one hand, forming close part- nerships with other leading institutions allows WUR to par- take in ground-breaking projects. Consequently, the chances of obtaining successful results with interesting applications improve exponentially, much to the delight of stakeholders.

In this sense, wealth in academia has consistently correlated with so-called ‘excellence’. WUR has pursued a smart strategy over the years by specialising in agricultural and environmental research. Focusing efforts in this way ensures that investments are made here rather than being scattered across different institutions. In addition to funding, which – though vital – is not by itself sufficient, many other elements hallmark education at Wageningen. A careful analysis of these may allow us to first identify and later assess their impacts, identify their weaknesses, and enable prompt responses should they become at risk.

Wageningen may be a unique place but it would be com- placent to say that is without parallel. Education at WUR does share features that are common to other world-class institutions, and some aspects in the way that students learn at Wageningen may not be inherently bound to the ‘WUR model’.

For instance, and as is common with other Dutch universities, teaching at Wageningen is noticeably hands-on and affords – relatively – less attention to theory. A major part of the learning process takes place in the form of research or projects that are action-oriented and carried out in small groups. Frequently, students are provided with a few key goals and aims and are thereafter given fewer instructions. In turn, the reward is an enormous feeling of fulfillment and students should be confident that they will remember their lessons. Besides, students are granted certain real life-like responsibilities in favour of their learning (say, the pleasure of having 24/7 access to a supercomputer for a Bioinformatics course or the opportunity to work with cutting-edge instru- ments) which also maximises the educational experience and applicability of studies.

The highly-interacting environment in Wageningen is re- inforced within our small town. Wageningen is not only set out as a niche nook for talented researchers but also as a habitat for motivated students. As many students stay in Wageningen for a short period of time (perhaps for an aca- demic exchange or a master’s degree), they tend to make the most of their time both in and out of campus. In this sense, I see the work hard, play hard mind-set among students to be highly stimulating and personally find it enjoyable to spend time among my peers who, in bearing diversity of experience and culture, have many fascinating stories to tell. Admittedly, time moves very fast and the bittersweet flavour of increasingly frequent goodbye parties is always at the tip of your tongue.

Of course, education in Wageningen is satisfying but it is not flawless. Challenges in recentyears have exposed cracks in the‘model’ that could jeopardise it as we know it. For instance, one could argue that the rising the number of students reflects an increase in reputation and quality, especially on the in- ternational stage, but is equally cited for some criticism, par- ticularly as of late. This issue may have in fact existed for some time already, but it is only now that WUR is opening its doors for more students that it has become evident that it has not done so in the smartest way.

Many students and staff members, particularly of Dutch nationality (for the most part because they know their uni- versities the best), have expressed concerns about a drop in the quality of education. They claim that the underlying cause is that the number of incoming students keeps rising at a faster pace than the increase in funding and infrastruc- ture – see for example the latest iteration of the daily time- table. While I share their concern in dropping quality, this ought not prevent the entry of more international students as some domestic students hold.

The fact that English is halfway established as a lingua franca in teaching is a trend common to other non-English speaking countries in order to lower the language barriers that heavily impede research. More conservative minds should know that this will not destroy self-cultural identity, but that isolation will. Doors should be kept open for international students more than ever as global outreach in academia grows more important. We will otherwise lose what we understand as WUR today, including our international reputation and far-reaching research.

True multiculturalism has also not resoundingly been attained, in the sense that only a minority of students come from beyond Europe. Even among that minority, many come from Western countries that share similarly high academic standards and accessibility. It is difficult to determine what holds back international students from further afield: could it be that studies abroad are less pro- moted, less accessible, or costlier? It is tempting to wonder if enough efforts are being made to support talents from all backgrounds, and time will tell if already existing measures, such as exchange programmes and collaborations, are effective in increasing diversity.

My final words shall be a call for action. We all naturally want WUR to maintain and improve its high standards. Unfortunately, though, institutional surveys are answered by a disappointing minority of students. By extension, policy decisions concerning students and staff both here and all over the Netherlands must be made without the weight of universality. The effort on our part to participate more is minimal and wipes off of the table an easy excuse for policy makers to discard students’ opinions. Other ways to draw attention to the WUR model include student protests, which are ef- fective and draw immediate attention but run the risk of being overlooked from an institutional point of view. We should be open and critical about our educational experience. I encourage you to debate with other students and be suggestive to your lecturers and study advisors.

Altogether, it is my hope that the university continues to enrich itself through the efforts of passionate students committed to improving our institution. The incorpora- tion of fresh ideas and a constructively critical environ- ment will push education forward at WUR. We should keep our eyes wide open to both preserve what is already built and to adapt it to modern times and new challenges. I am confident that the future is bright if we persevere. 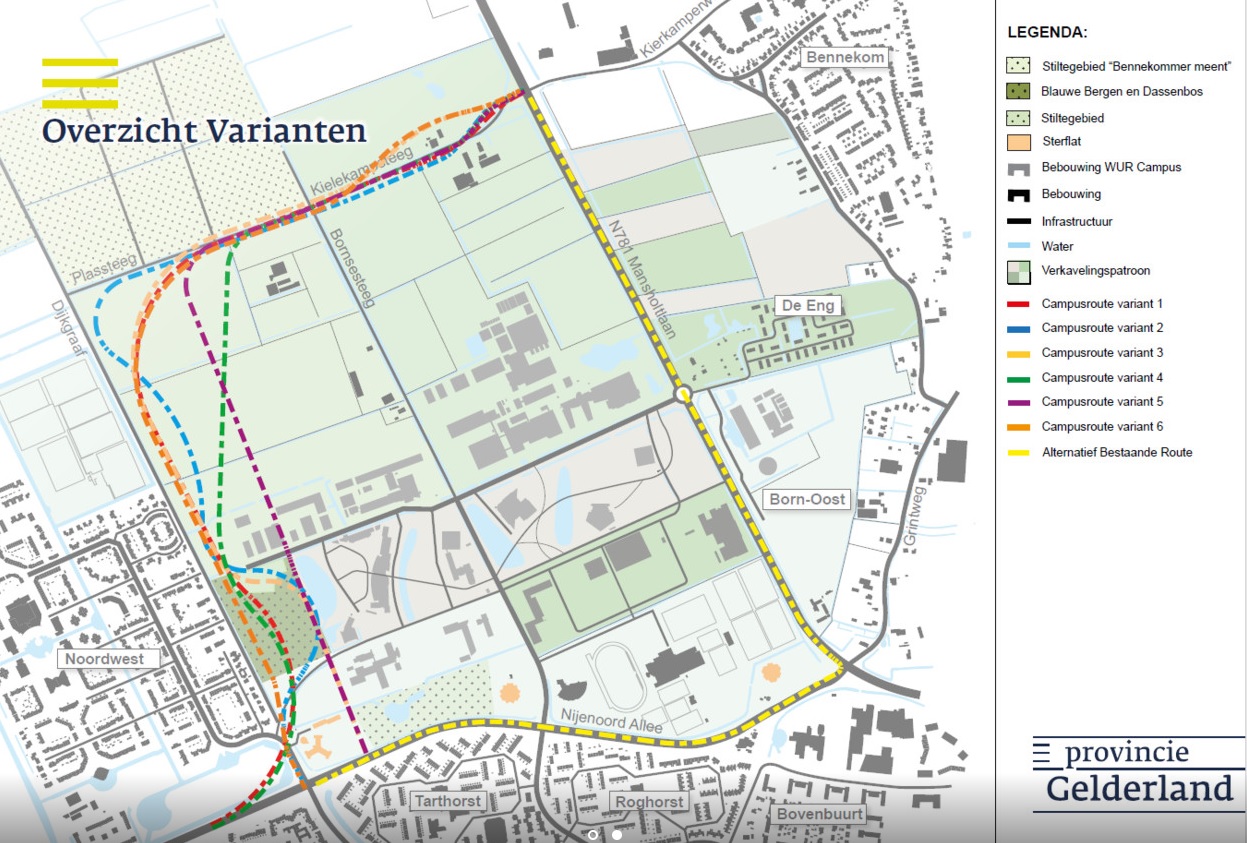 In the recent report on the new road around campus, six routes were proposed to race around campus. Because many of you probably could not tell the difference between the six alternatives, we describe here what makes every route so special. Which variant would you choose? 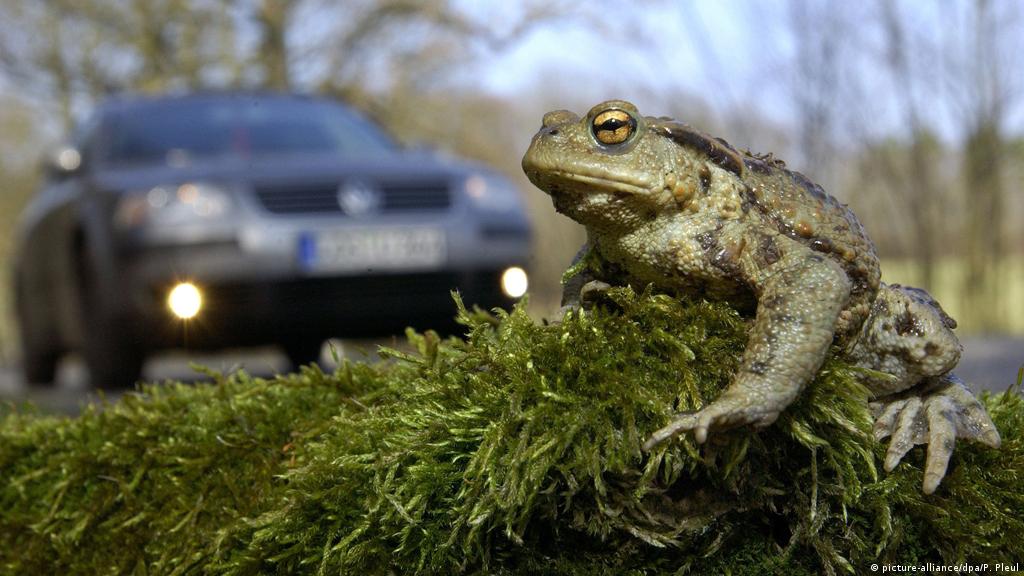 The March of the Toads

Why did the toad cross the road? Hop on this amphibian story.